Assisting service members
who sustain life altering injuries
...now and in the future. 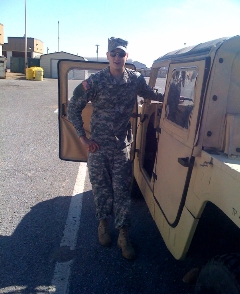 U. S. Army Specialist 4, Matthew Christopher Powell of Slidell, LA was deployed to Afghanistan in May 2010 from Fort Campbell KY.  Matthew was home on leave in September 2010.  He had such a great time.  He was struggling with things going on over there but he stood proud as an American soldier.  As his leave drew to a close, we drove to the airport on September 21 trying not to cry.  Matthew would not let me stay with him at the airport.  He told me he had to get his head together to head back to Afghanistan.  I left and watched as he walked to the gate.

Sergeant Patrick Oliver Williamson answered his life’s calling when he joined the US Army in August of 2006 after completing 2 years of Mechanical Engineering at the University of Louisiana in Lafayette.    Although his choices were unlimited, he chose the infantry as a career path as he wanted to be one of the guys with boots on the ground on the front lines.

At age 17 Joseph Bovia started his senior year at Bonnabel High School in Kenner, Louisiana.  He was again enrolled in Junior Air Force ROTC and told his parents he planned on joining the Marine Corps upon graduation from High School.  That is exactly what he did.  After completing boot camp at Paris Island, South Carolina he received extra training and was deployed to Iraq in support of Operation Iraqi Freedom.

Find us on Google Map

Live In The Freedom